so I wanted to make a dedicated thread for them. They’re kind of like chems you’d add to cards the past few years. You can add two offensive and two defensive strategy cards at a given time

There are three tiers of strategy cards: Gray (common) 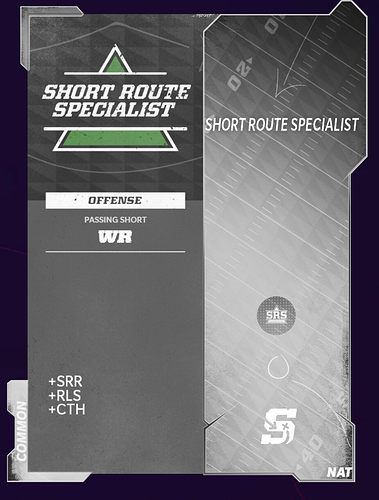 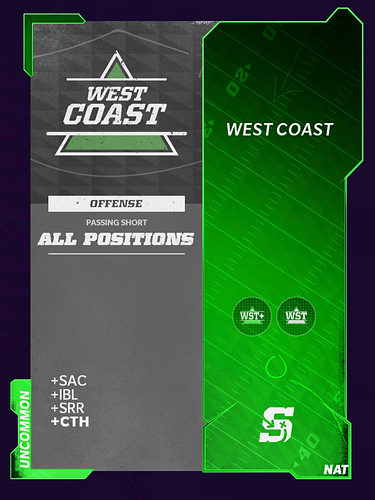 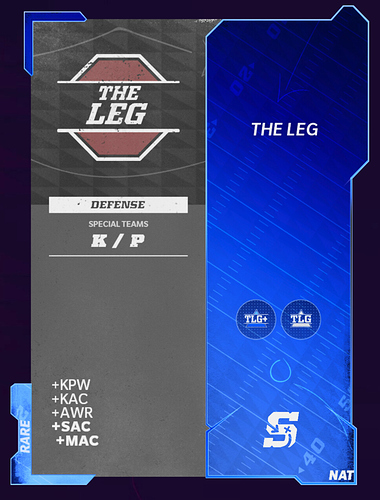 Some benefit only certain positions, some benefit the entire offense or entire defense. Grays give you boosts to three different attributes, greens give you four, and blues give you five. You can also upgrade your strategy cards using training 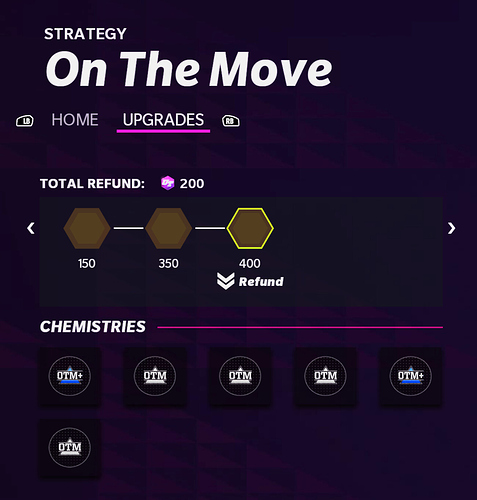 , though I’ve only seen HB/WR, and I’ve heard there’s also two on D for DBs or CBs. I’ve only seen the speed cards in 2 of the 4 rare fantasy pick from 10 exchange. I’ve heard you can stack the speed boosts if the attributes on the strategy card aren’t all the same, but I haven’t had 2 for the same position to test it yet.

These are the four strategy cards I’m using now, brought my team OVR from 80 to 81, and my entire defense has a ratings boost. I’m using two speed cards on offense, two team cards on D 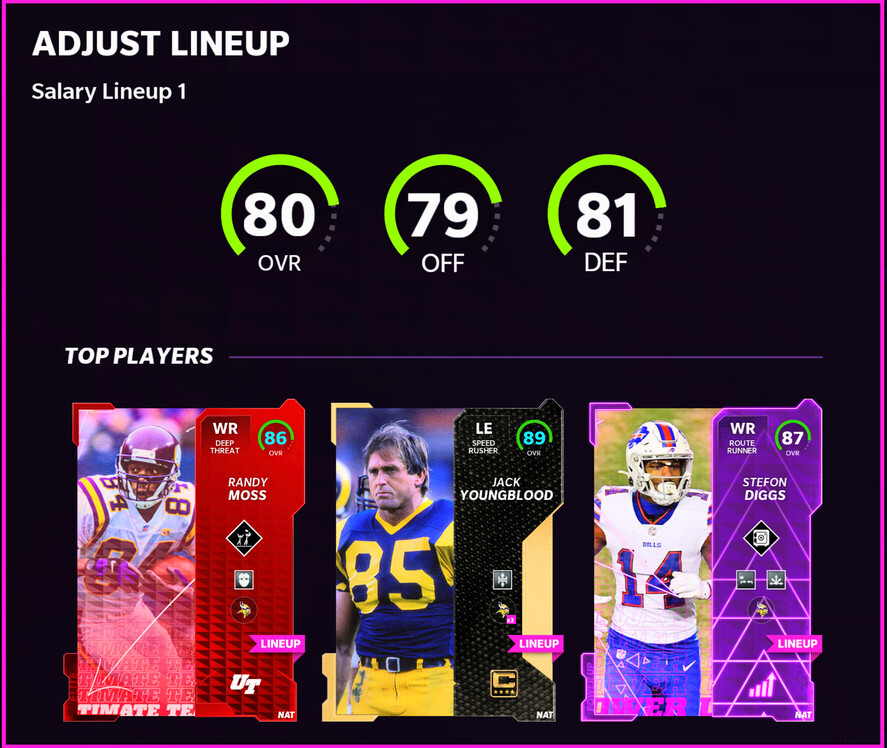 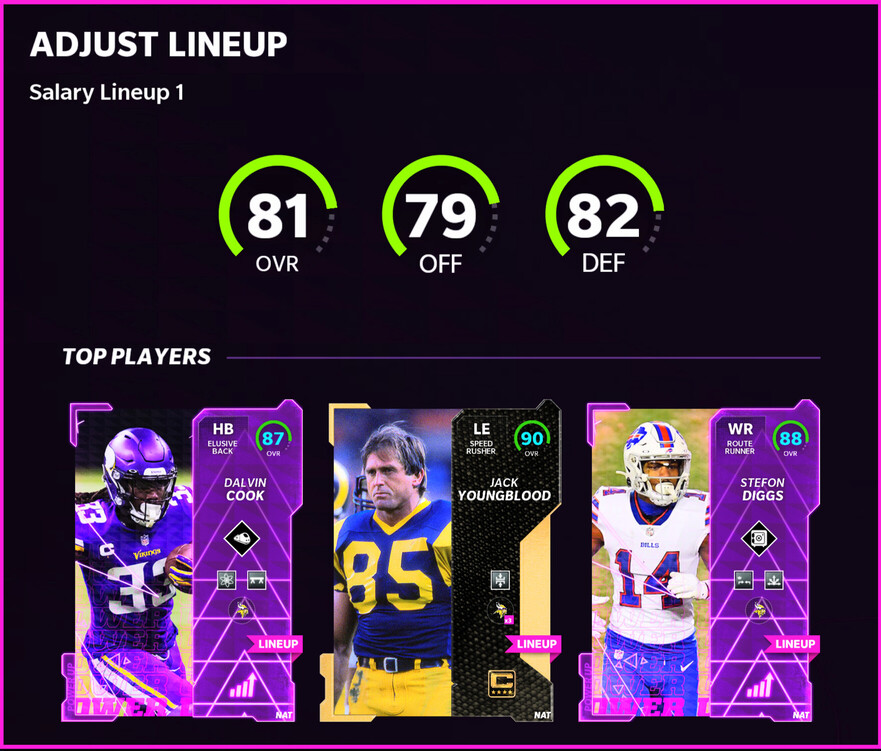 You can get a gray strategy card by playing each day, or buy them in the store for 5K coins 🪙 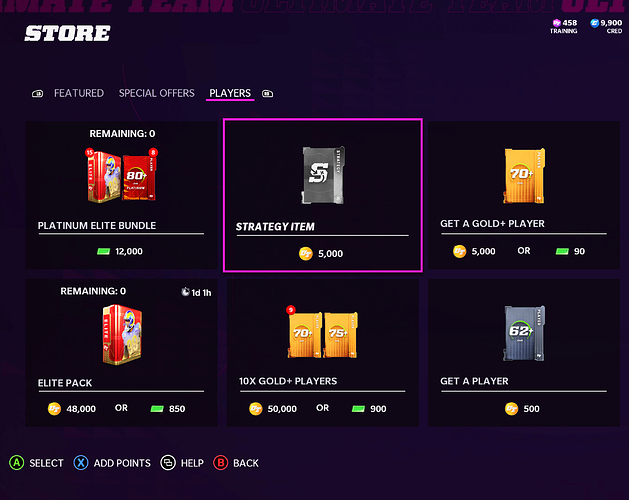 You can also pull a green uncommon (odds probably 1 in 20-25) or a blue (odds gotta be 1 in 100 or more, only pulled one). So you could on average need about 150k coin to build a blue rare strategy card. Sometimes less if you’re lucky and pull 2-3 greens

sometimes more if you’re unlucky and get 1

You can combine 8 gray common cards into one green uncommon 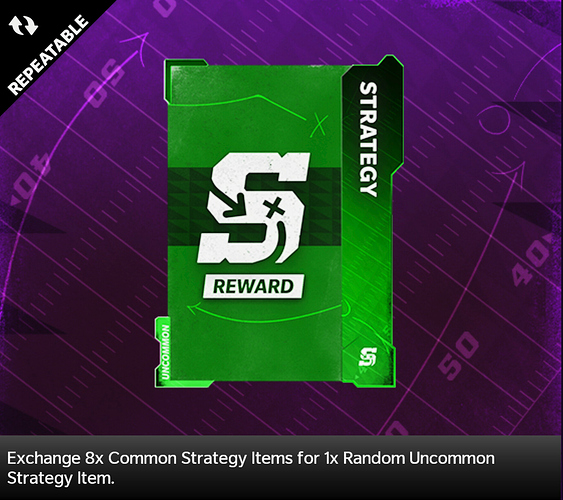 You can combine 40 gray common cards into one blue rare 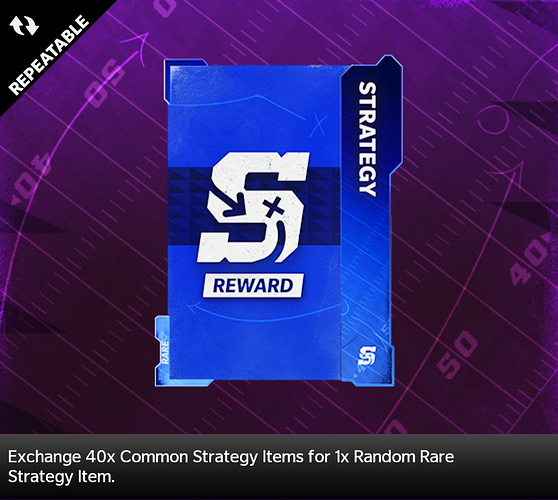 You can combine 5 green uncommon cards into one blue rare 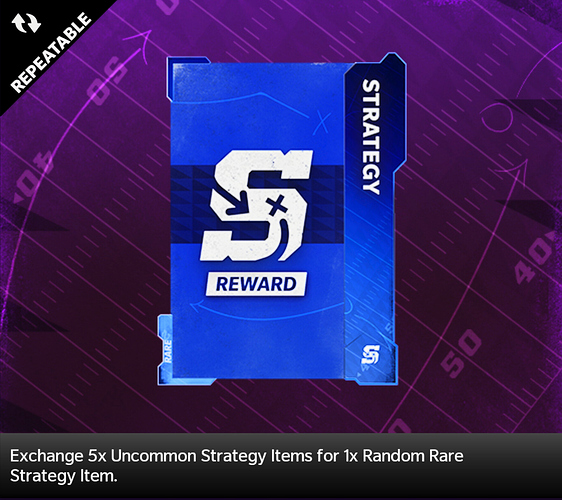 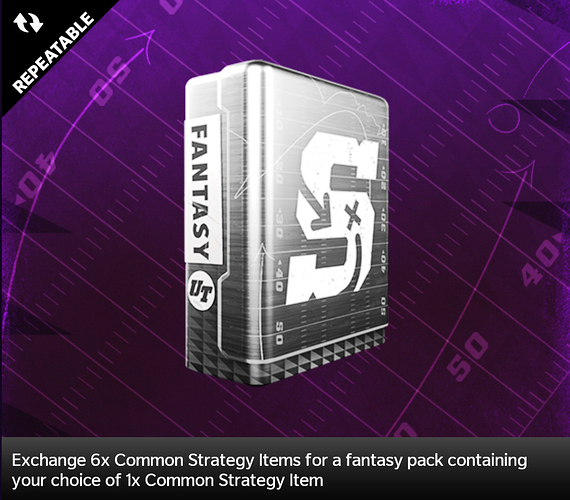 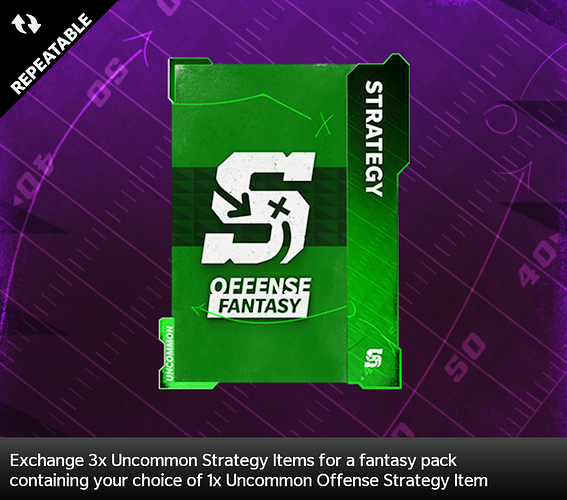 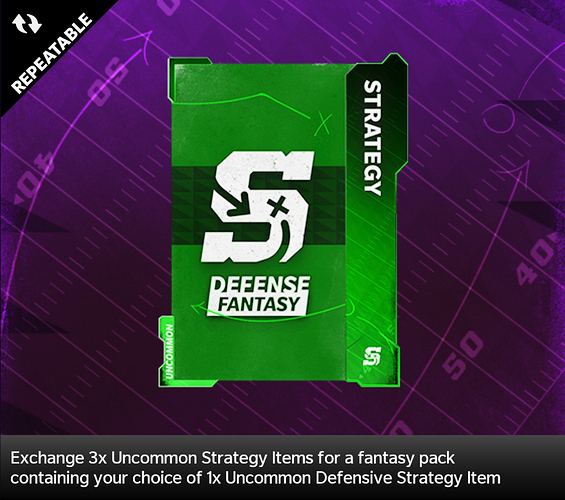 And finally, you can combine 2 blue rare cards into a fantasy pack to choose between 10 random offensive or defensive cards 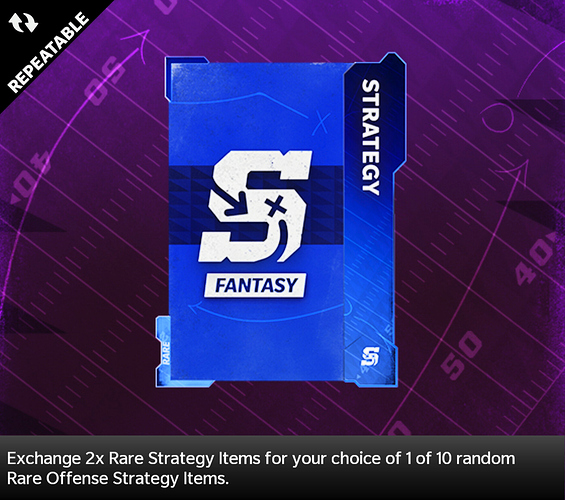 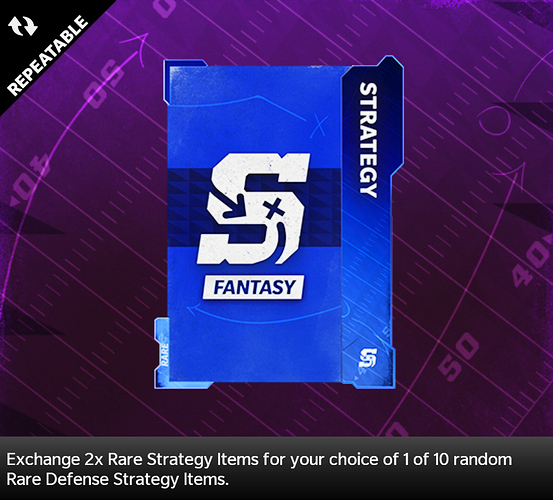 On the blue rare cards, not only are the 10 cards random, but the rolls on each card are random

It’s kind of like Diablo or Destiny where there are better and worse rolls of certain cards. You can see here two On The Move cards that boost your HBs, one card that gives JKM, SPM, BCV, SPD, ACC and the other card has CTH instead of ACC 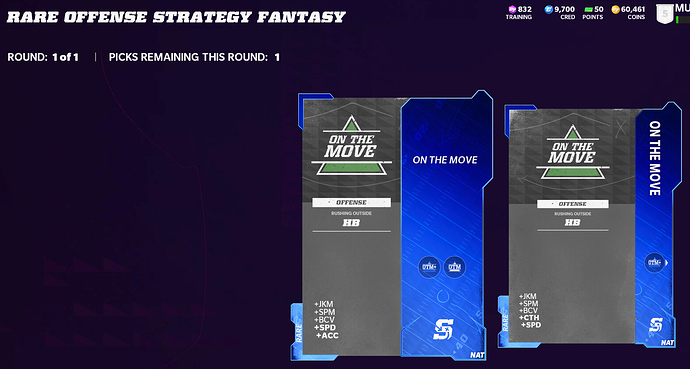 Then there’s also the training cost of upgrading each card (900 training altogether for a blue rare). On the flip side, it can be a good boost to your squad early in the year, when an extra point or two of speed or awareness can really makes a difference

Let me know if you guys are using these and what your thoughts/experiences are!

I would also add that it is more cost-effective to put lower tier cards in a set than just to QS them right away. Because, for example, a common card quicksells for 1k coins, and you need 8 of them to build an uncommon card which in turn quicksells for 9k. The same applies to rare cards that quicksell for more than the sum of uncommon cards used to build them. 10k difference, iirc. Although I’m not sure it’s reasonable to QS rares

Let me know if you guys are using these and what your thoughts/experiences are!

They look like a waste of coins to me. +1 speed is good, but the other +1’s look lame. We used to have +5’s from the old chemistries

We used to have +5’s from the old chemistries

I think if they make boosts smaller this year, that’s actually a good thing. 99 speed by Ultimate Freeze is just too soon, it ruins the game. So you could theoretically get up to +4 speed with two strategy cards and a 50/50 theme team, but only for certain positions. I think that’s a positive! You can get +2 to certain attributes, and could use these cards to hit attribute thresholds, so I think having the option is good. Having them locked behind a coinwall with randomized elements, with the cards unsalable is also good in my opinion, because it keeps everyone from using the same handful of cards.

Overall, I actually really like the strategy cards. I wonder if they’ll eventually start having higher tier versions like purple and orange cards

Got another good one! 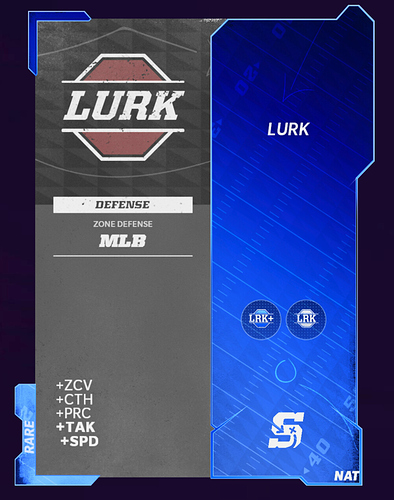 Didn’t know there was one that boosted speed for MLBs. Also, it gives +2 ZCV when you upgrade it, really good card.

My next target is the one that gives a speed boost to defensive backs. Then I may want to double up On the Move, more interested in another speed point for my HB than on my WRs.

All I been getting is common ones and one uncommon. I got excited that we got the green ones after playing superstar until I found out it only help the superstar players. 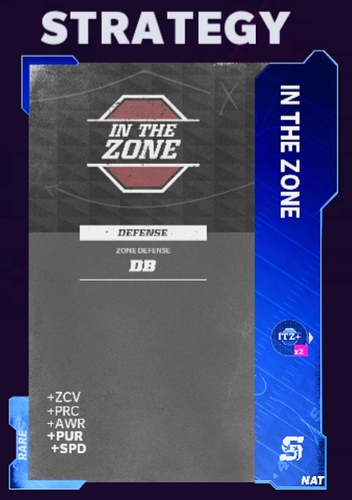 Then I may want to double up On the Move

This doesn’t work, can’t use 2 of the same type of card. You’d be able to get a double speed boost on D to CBs because there’s one for DBs and another just for CBs. Possibly also MLBs and SSs, because there’s a SS/MLB specific card.

Also saw a speed card for OLBs/DEs for the first time last night.

Really enjoying this thread, learned a lot so far from your post. Been seeing some of those blue cards you post, gives me an idea what to go after. Right now I have my daily commons and 3 green cards, Collecting to make blue cards.

Thanks @star5CR34M for this informative thread.

I got the rare On The Move and the Speed in Space from the superstar challenges. They both upgrade speed, but only my On The Move boosts are showing in my cards. Is it just a visual glitch or can certain cards not be combined?

Speed in Space only works on Superstars players, unfortunately.

Wow. That’s wack. Thanks though.

Legend strategy cards? Wonder if they are going to come out with more.
ALL LEGEND TT could make things interesting. MUT 19 they had all legend chems, I was so excited for Mut 20 at release because I had some points saved up and was looking forward to building an All-LEGEND TT.
As y’all know no legend TT for 20 or 21.
Will be interesting to see if we get more legend strategy cards and what they offer.

This is how you play D @jawnmadden

That Hitman Harry stop on Derrick Henry at the goal line is one of my all-time highlights, Henry has been tearing me up this year.

Not only did you stop the madden God, you used a Léon clip. I wish I could like this twice.

“That boy be on fire”

Welcome to the site! I’m sorry, our users just aren’t very engaged with MUT this year.

2kgamer the same way. Not alot of people commenting. It usually be jumping when content come out or before content come out. Plus they change the speed strategy to 2 speed and - 2 height which is some crap. I was wondering your my overall in defense went down from 91 to 90. My Derrick Henry drop to 95 when he was 96 with 99 speed. I was enjoying a 99 speed tank but I change it to strength and not he a 97 with 95 speed due to titans chem. Even my RE hugh was unstoppable with 99 speed